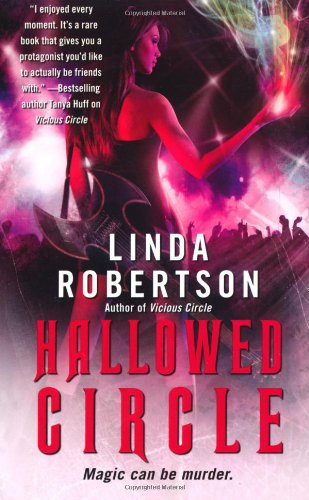 Hallowed Circle
Linda Robertson
And you think beauty pageants are scary? Persephone Alcmedi has been persuaded to compete for the position of High Priestess of the Cleveland, Ohio, coven -- now that the former priestess, Vivian Diamond, has strangely gone missing. Unfortunately, there are a few small problems with the idea. Not only does Seph know rather more about Vivian's disappearance than the other witches realize, but the epic struggle she's just survived has left her with some highly unusual powers -- ones that could be dangerous to reveal. Despite her reluctance, she agrees to participate, if only to prevent snooty Hunter Hopewell, an obnoxious but talented witch, from ending up in the winner's circle. Can Seph hide her secrets -- including her connection to the master vampire-wizard Menessos -- from the terrifyingly wise judges? Plus, there's her rock 'n' roll werewolf boyfriend, Johnny, and some angry fairies to deal with.... Once the competition begins, a finalist turns up dead. It looks as if one of the contestants is willing to do anything -- including murder -- to win. Suddenly Seph has even more on her plate than she thought: from solving a murder to working out what her new powers really are...and exactly why they're creating so much havoc in her love life.
1 Vote

The High Priestess of Cleveland, Ohio has disappeared. To restore order out of chaos, the town holds a competition for the new leader. As a future key player in the town, Persephone (Seph) Alcmedi must compete for the job. When people start disappearing from the competition and one woman is murdered, it's becoming harder and harder for Seph to hide her biggest secret from the judges; to add to the trouble, her sexy boyfriend, Johnny, is having trouble with some fairies. Will Seph be able to handle everything without completely breaking down?