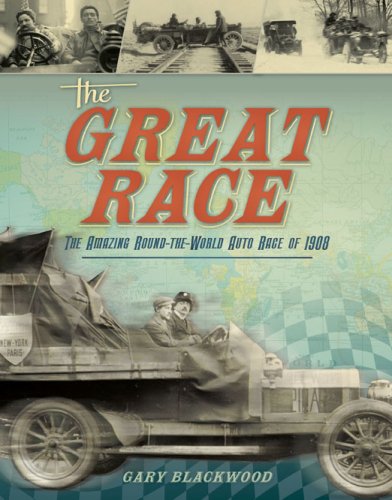 The Great Race
Gary Blackwood
Long before the Amazing Race television show there was the Great Race—a thrilling true story that will grab readers from the start to the finish line.In February of 1908, six cars from four countries gathered in Times Square for the pistol shot that began the first around-the-world automobile race. Gas-powered cars hadn€™t been round very long, and roads were nonexistent as this group of hardy pioneers set out to drive from New York to Paris, hoping to cross the ice of the Bering Strait along the way. The Europeans were sure their cars were superior, but it would be the scrappy Americans in their Thomas Flyer, after braving twenty-foot snowdrifts, bandits, and many near drownings, who would win the race.In a book published to coincide with the 100th anniversary of the race, Gary Blackwood, author of well-known historical-fiction novels, crafts a thrilling narrative of great courage and splendid folly, illustrated with original, never-before-published photo
1 Vote

The Great Race is a distinct book about a miraculous journey, in 1908, from New York City to Paris by automobile. Not only is this a miraculous feat by itself, but also the automobile was very unreliable, as well as very mysterious to the general public. This would be a test of courage and mettle, one that isn't for the uncourageous. The media and the public just loved this event, and as the racers started off, the streets of New York City packed. There needed to be many police escorts in order to keep the onlookers away, and even then the passengers and drivers were harassed.