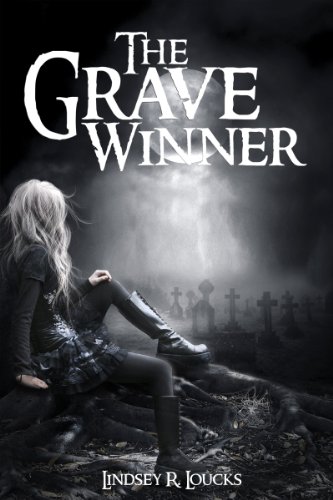 The Grave Winner
Lindsey R Loucks
ONLY $4.99 FOR A LIMITED TIME! Leigh Baxton is terrified her mom will come back from the dead -- just like the prom queen did.While the town goes beehive over the news, Leigh bikes to the local cemetery and buries some of her mom's things in her grave to keep her there. When the hot and mysterious caretaker warns her not to give gifts to the dead, Leigh cranks up her punk music and keeps digging.She should have listened.Two dead sorceresses evicted the prom queen from her grave to bury someone who offered certain gifts. Bury them alive, that is, then resurrect them to create a trio of undead powerful enough to free the darkest sorceress ever from her prison inside the earth.With help from the caretaker and the dead prom queen, Leigh must find out what's so special about the gifts she gave, and why the sorceresses are stalking her and her little sister. If she doesn't, she'll either lose another loved one or have to give the ultimate gift to the dead - herself.
4 Votes

This book is about a teenage girl, Leigh Baxton, whose mother died. The story starts at Leigh's mother's funeral.

What's this?
The Grave Winner review by R. Mae

Leigh’s Mom is dead, and Leigh is afraid that she is going to come back. And not in a good way. In a scary way that Leigh is terrified of. Strange things start happening in the graveyard, and before long Leigh has to decide if she is willing to give up everything. It doesn’t help that she might be falling for a mysterious boy, and her best friend's brother takes a sudden interest in her.

What's this?
The Grave Winner review by ViviB

Main character, Leigh, has just lost her mother. As if that isn't enough, on the day of her mother's funeral, she sees the ghost of a cheerleader. Now, on top of grieving for her mother and trying to play a maternal role for her younger sister, she has to make sure that her mother won't come back from the dead, like Sarah the cheerleader did. When in the cemetery, she meets Tram, a seventeen-year-old without parents, who warns her not to give gifts to the dead and isn't exactly what he seems like at first glance.

What's this?
The Grave Winner review by mditzel

The book the Grave Winner was about a girl named Leigh whose mom had died. While she was at her funeral she thought she saw a ghost of her classmate come back from the dead. Leigh soon thought if she buried some of her mother's favorite things in her grave she wouldn't come back. While she was burying the "gifts," she was warned by someone named Tram to not give gifts to the dead.