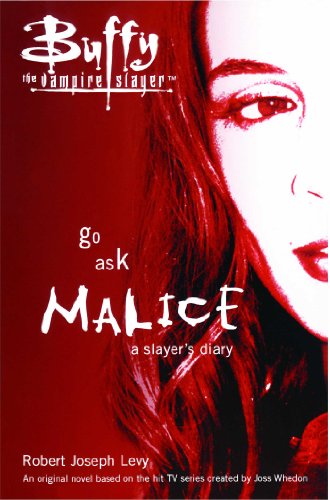 Go Ask Malice
Robert Joseph Levy
January 22 Had the dream again last night. Only, this time it was different. . . . Faith has always been a loner. Growing up in a broken home in South Boston, shuffled from relative to relative, her only companion was an imaginary friend named Alex, who helped her escape into a fantasy world of monsters and the supernatural, far from the real-life horrors of the waking world. Now, taken away from her mother by social services and shipped off to a foster home, Faith learns that some nightmares are all too real, that the inventions of her childhood really do haunt the night, hungry for blood. Enter Diana Dormer, a Harvard professor and representative of the Watchers Council who has come to tell Faith of her destiny, to train her, to prepare her for what is to come: Faith is the Chosen One. She alone will stand against the vampires, the demons, and the forces of darkness. But she's not alone. When Alex, her childhood companion, returns in her dreams, she warns Faith that someone else is coming for her, a force so deadly and unforgiving that it has inspired fear in the underworld for a thousand generations. Its name is Malice. As memory and fantasy begin to merge, Faith's two worlds collide, with cataclysmic results. A violent battle for the Slayer's soul is staged, winner take all. This is her story. . . .
1 Vote

During Season Three of the television series Buffy the Vampire Slayer, viewers were introduced to Faith, a bold Slayer who loved breaking the rules and testing the limits. A fan favorite, she appeared on the spin-off series Angel on multiple occasions, then came back to BtVS during its final season.

Faith was one of my favorite characters. She was memorably portrayed by actress Eliza Dushku. Many fans wished she had her own spin-off. Those who were loyal readers of the official BtVS/Angel original books also wished for a book that focused solely on Faith.