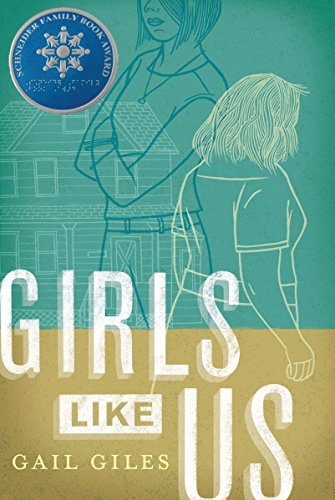 Girls Like Us
Gail Giles
A 2015 Schneider Family Book Award WinnerWith gentle humor and unflinching realism, Gail Giles tells the gritty, ultimately hopeful story of two special ed teenagers entering the adult world. We understand stuff. We just learn it slow. And most of what we understand is that people what ain’t Speddies think we too stupid to get out our own way. And that makes me mad. Quincy and Biddy are both graduates of their high school’s special ed program, but they couldn’t be more different: suspicious Quincy faces the world with her fists up, while gentle Biddy is frightened to step outside her front door. When they’re thrown together as roommates in their first "real world" apartment, it initially seems to be an uneasy fit. But as Biddy’s past resurfaces and Quincy faces a harrowing experience that no one should have to go through alone, the two of them realize that they might have more in common than they thought — and more important, that they might be able to help each other move forward.Hard-hitting and compassionate, Girls Like Us is a story about growing up in a world that can be cruel, and finding the strength — and the support — to carry on.
2 Votes

This is a book about two girls, Quincy and Biddy, both of whom were in their school's Special Education progam and just recently graduated. The reader learns alot about these two girls and their pasts.

In the book you also see how different the girls are so it is surprising when they are made roomates in their first apartment. Biddy and Quincy learn to get along and lean on each other for support.

It is a story about growing up.