The Girl in the Steel Corset 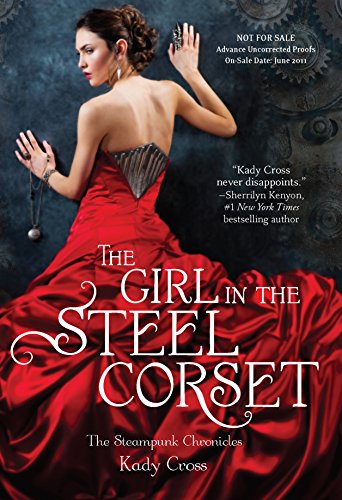 The Girl in the Steel Corset
Kady Cross
In 1897 England, sixteen-year-old Finley Jayne has no one…except the "thing" inside her.When a young lord tries to take advantage of Finley, she fights back. And wins. But no normal Victorian girl has a darker side that makes her capable of knocking out a full-grown man with one punch….Only Griffin King sees the magical darkness inside her that says she's special, says she's one of them. The orphaned duke takes her in from the gaslit streets against the wishes of his band of misfits: Emily, who has her own special abilities and an unrequited love for Sam, who is part robot; and Jasper, an American cowboy with a shadowy secret.Griffin's investigating a criminal called The Machinist, the mastermind behind several recent crimes by automatons. Finley thinks she can help—and finally be a part of something, finally fit in.But The Machinist wants to tear Griff's little company of strays apart, and it isn't long before trust is tested on all sides. At least Finley knows whose side she's on—even if it seems no one believes her.
1 Vote

Tweet
The Girl in the Steel Corset review by SClau

The Girl in the Steel Corset, by Kady Cross, is a book set in late 19th century England. Finley Jayne is sure that there is something wrong with her. Whenever she feels threatened, the thing inside her comes out and makes her more powerful and strong than the average man. She has lost too many jobs due to her strange power, and she is tired of always running away. But after a chance encounter with Griffin King, Duke of Greythorne, she begins to learn more about the thing inside her.