Gifts From The Gods:Ancient Words and Wisdom From Mythology 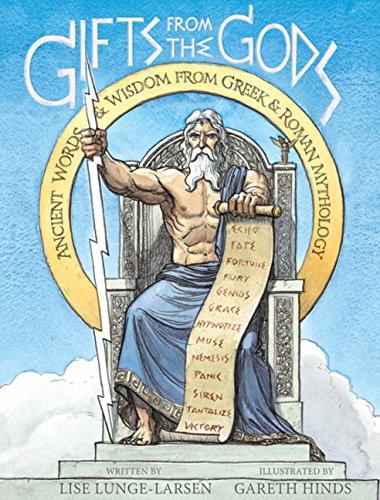 Gifts From The Gods:Ancient Words and Wisdom From Mythology
Gareth Hinds, Lise Lunge-Larsen
Ancient names come to rich and fascinating life in this lavishly illustrated gift book for mythology fans and word lovers.Did you know that “museums” were initially temples built to worship the nine muses, the goddesses of the arts? That “Janus” was the god of the doorways and hallways, and we have named our janitors after him?Where did these words — and other words, such as chaos, genius, nemesis, panic, echo, and narcissus — come from? From the ancient stories of the Greeks — stories that rang so true and wise that the names of the characters have survived for centuries as words we use every day. The brief stories here not only impart the subtle wisdom of these ancient tales, but make us understand the words, and our own world, more deeply.
1 Vote

Tweet
Gifts From The Gods:Ancient Words and Wisdom From Mythology review by AYay_RPEMS

Gifts from the Gods is about how Greek & Roman mythology relates to common words we use now. For example the word echo comes from the Greek myth of the girl named Echo who could only repeat the last words said to her. Now she roams in caves, tunnels, and various other places. Another example is fury (anger), which comes from the Greek myth of the three furies, mythological creatures that decide the pats of life (who lives, who dies, etc.). Another example is even the word arachnid. Arachnid now means an eight-legged arthropod.