A Gathering of Gargoyles 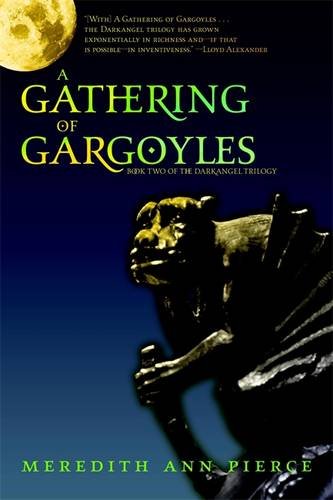 A Gathering of Gargoyles
Meredith Ann Pierce
Book Two of the Darkangel Trilogy! Aeriel has broken the spell on the vampiric darkangel known as Irrylath and returned him to his human form, but the White Witch continues to haunt his dreams. To save her love and the world they live in, Aeriel sets off on a quest across the Sea-of-Dust, to solve a mysterious riddle and gather six magical steeds. Pursued by the White Witch and haunted by her six remaining darkangels, the former slave girl seeks out an ancient oracle who may help her find a way to defeat her enemies.
1 Vote

This book is a fantasy novel that was made to entertain. It was a thought-provoking novel and an adventure story, with both internal and external conflicts. In the novel, Aerial has saved Irrylath from his fate as a vampyre and they are married, but he still shuns her. She realizes she must set off to find the lost lons, or guardians, to be mounts for Irrylath's brothers in the upcoming battle against the remaining vampyres and their leader, the White Witch. On her journey, she meets new and old friends, including six gargoyles she tamed.