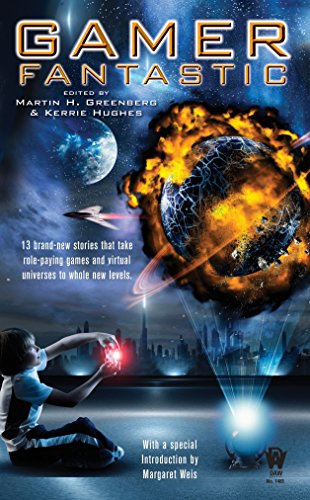 Gamer Fantastic
Kerrie L. Hughes, Martin H. Greenberg
Let the games begin! These thirteen original stories by veterans of the fantasy realms take role-playing games and universes to a whole new level. From a teenager who finds a better future in virtual reality; to a private investigator hired to find a dying man's grandson in the midst of a virtual reality theme park; from a person gifted with the power to pull things out of books into the real world; to a psychologist using fantasy role-playing to heal his patients; from a gaming convention where the real winners may not be who they seem to be; to a multi-layered role-playing game that leads participants from reality to reality and games within games-these imaginative and fascinating new tales will captivate both lovers of original fantasy and anyone who has ever fallen under the spell of role-playing games.
1 Vote

"Gamer Fantastic" is a collection of fantasy short stories relating to video games. The stories are about everything from a single virtual reality to many virtual realities and everything in between. Each short tale is told by a different author.