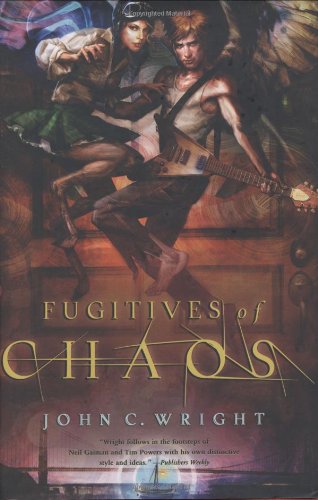 Fugitives of Chaos
John C. Wright
Wright's new fantasy, which began with Orphans of Chaos, and continues in Fugitives of Chaos, is a tale about five orphans raised in a strict British boarding school who begin to discover that they may not be human beings. The students at the school do not age, while the world around them does. The orphans have been kidnapped from their true parents, robbed of their powers, and raised in ignorance by super-beings no more human than they are: pagan gods or fairy-queens, Cyclopes, sea-monsters, witches, or things even stranger.The five have made sinister discoveries about themselves. Amelia is apparently a fourth-dimensional being; Victor is a synthetic man who can control the molecular arrangement of matter around him; Vanity can find secret passageways through solid walls where none had previously been; Colin is a psychic; Quentin is a warlock. Each power comes from a different paradigm or view of the inexplicable universe: and they should not be able to co-exist under the same laws of nature. Why is it that they can?The children must experiment with and learn to control their strange abilities in order to escape their captors. Something very important must be at stake in their imprisonment.
1 Vote

The five orphans of chaos have had their memories erased, and now they are going back to the schedule they had before they tried to escape. Then Amelia remembers everything that happened to her and her friends, and knows their memories have been erased. The five know they have to try to escape the school and recover their memories, and this time they are better prepared to face their enemy. Their escape seems to be working but then Colin attacks Boggins and disappears and Amelia is taking by Mr. Glum into his underwater lair.