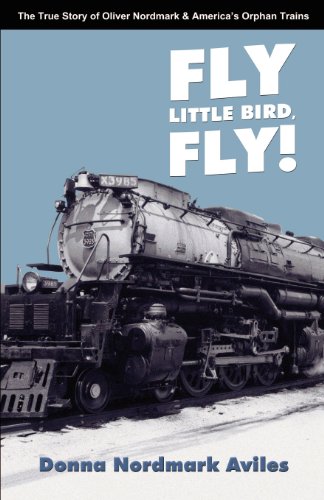 Fly Little Bird, Fly
Donna Nordmark Aviles
Holding tight to one another, vowing never to be separated, Oliver and Edward board the Orphan Train headed west to find a new home. The year is 1906 and the boys have been told that their mother has died and they are now alone. Follow the TRUE adventures of the Nordmark brothers as they travel on America's Orphan Train from the streets of New York City to the vast farmlands of the Midwest. Will they find a family to love? Will they be able to keep their promise? The future that awaits them will be full of twists and turns, surprises and anguish, all of which will shape their lives forever!
1 Vote

Fly Little Bird, Fly chronicles the life of Oliver and his younger brother, Edward, when they become orphans in New York City. After living in an orphanage and being separated from each other for a year, the two brothers are chosen to travel on the orphan train together. This train brought orphans from New York City across the country to find them homes in the Western United States. In Kansas, Oliver and Edward are chosen to live in the home of two farmers. Unfortunately, their new foster home is less than exemplary; the boys are forced to do farm chores and are given no affection.