The Flight of the Dragons 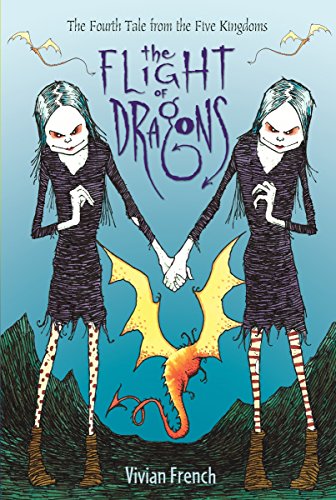 The Flight of the Dragons
Ross Collins, Vivian French
How long does a dragon’s egg take to hatch? Find out as this hilariously macabre series continues. (Age 8 and up)In this deadly funny fourth Tale from the Five Kingdoms, it’s Gracie Gillypot’s birthday, and Prince Marcus plans to show her a flight of dragons as a special gift. But when greedy, chocolate-hungry twins awaken the banished Old Malignant One, evil magic and Total Oblivion threaten the Five Kingdoms. Gracie must find a powerful, long-forgotten dragon’s egg before the Old Malignant One does in order to save the day. With the help of a wayward troll, two chatty bats, and the ancient crones, can Gracie foil his rotten plans? And can she overcome a spoiled princess, a malicious crow, and loads of chocolate cake to do so?
1 Vote

Tweet
The Flight of the Dragons review by Alex412

This story started slow and introduced the two main characters Prince Marcus, second in line to the throne of Gorebreath and Gracie Gillypot, a Trueheart. These two also have help from two smaller characters like Gubble, a domesticated troll and Marlon, a bat. These people find a dragon's egg and face many troubles both while looking for it and after they find it. They even find help along the way from Queen Bluebell who returns Gubble after he runs off. At the end of the story they bring the egg back to the dragons just in time to see it hatch.