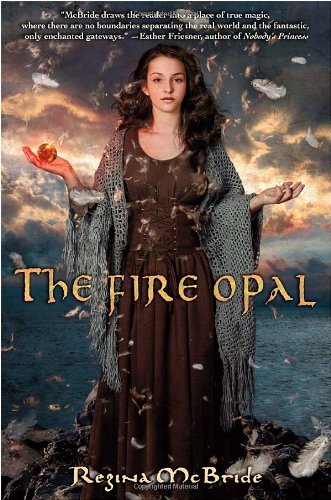 The Fire Opal
Regina McBride
There was a time when Maeve O'Tullagh led a simple life; a time when she and her mother, Nuala, collected kelp on the foreshore near their cottage in Ard Macha; a time when she played among the Celtic ruins with her older brothers and daydreamed about the legendary Holy Isles, an enchanted land ruled in a past age by a beautiful goddess. But after Maeve's sister, Ishleen, is born, her mother sinks into a deep, impenetrable trance. For years, Maeve tries to help her mother "awaken," and then the unthinkable happens: Ishleen succumbs to the same mysterious ailment as Nuala.            Heartbroken to think that her sister and her mother might be lost to her forever, Maeve sets off on an unimaginable quest to a world filled with fantastical creatures, a web of secrets, a handsome, devious villain who will stop at nothing to have her hand in marriage—braving them all to retrieve a powerful glowing stone that will help her recover the souls of her loved ones and bring them home to Ard Macha.             An adventure-filled and spellbinding novel, The Fire Opal will enchant fantasy readers young and old.
1 Vote

The Fire Opal by Regina McBride follows the life of Maeve O'Tullagh, who seems to take after her mother, Nuala, in hearing voices in the secluded Ard Macha, Ireland. When Maeve's sister Isheleen is born, Maeve is overjoyed. It took a while because she had to be reincarnated twice. However, Ishleen and her mother fall under a strange spell that renders them unconscious. Maeve suspects that the handsome yet dark-spirited Tom Cavan has had something to do with this. She discovers that he's made a pact with an ancient goddess to gain control of Ireland.