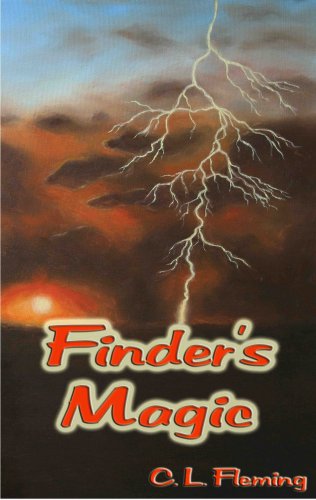 Finder's Magic
C.M. Fleming, Tom Varnon, Dianne Hamilton, C. M. Fleming
1911. Atlanta, Georgia -- Murder! Hank McCord witnesses the murder of his best friend by two mill supervisors. There's another witness, a stranger. Calvin Yates, a Negro boy about Hank's age, questions Hank's desire to go to the sheriff for help: Didn't you hear em? The sheriff be as big a crook as anybody. A chase begins that forces the boys to flee to the only person who can help them, the Finder. She is a mysterious, old woman know by many names--conjure woman, witch, finder of lost things -- a seer. Though blind, the old woman has visions and powers that Hank finds almost as terrifying as the murderers on his heels. Tension and distrust between the two boys grow until it threatens to destroy both. They have been framed for the murder of Hank's friend. The law is on the lookout for Hank and the KKK makes a night ride seeking Calvin. Can Finder's magic save them? Will Hank live to celebrate his twelfth birthday in two weeks? Will the two boys, in spite of their differences, create some magic of their own to solve their problem? Or will one, or both, die trying?
1 Vote

Hank McCord, and a soon-to-be black friend Calvin Yates, witnessed Hank's best friend's murder. After the murder, the two boys were forced to realize just how deep racial tensions ran in early twentieth century America. The murderers, Hank's bosses, would do anything to kill Hank and Calvin. The bosses feared that the murder victim had told Hank and Calvin about a secret operation the bosses were planning.