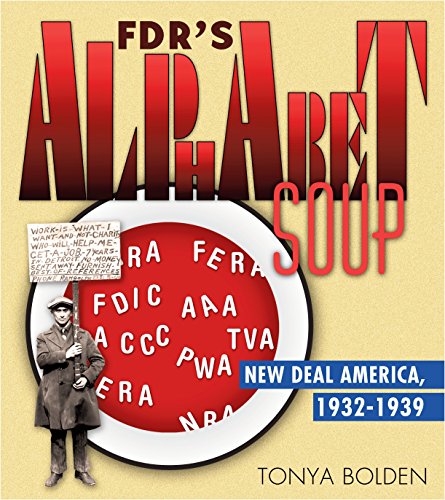 FDR'S Alphabet Soup
Tonya Bolden
FDR’S New Deal, which followed the 1929 stock market crash, was a hugely influential moment in the history of the United States, encompassing everything from the arts to finance, labor to legislation, and some think it helped bring the country out of the Great Depression. Here, Tonya Bolden, writing in her trademark accessible style, creates a portrait of a time that changed American history both then and now.FDR’s First 100 Days and how the United States was changed by it then are closely examined, especially now. The 2009 financial situation is eerily mirrored by that of the late 1920s, and this is a perfect book to help teens understand history and its lasting impact on current events.
1 Vote

FDR's Alphabet Soup, by Tonya Bolden, is an interesting book about the efforts Franklin Delano Roosevelt took to save the country from the Great Depression. It describes, in detail, the plans, acts, and programs the President established, such as the CCC, the Emergency Banking Act, and the Farm Credit Act. This book takes you through FDR's presidential term and describes how the American people responded to his ideas. During the Depression, people were poor, hungry, and in desperate need of a quick solution.