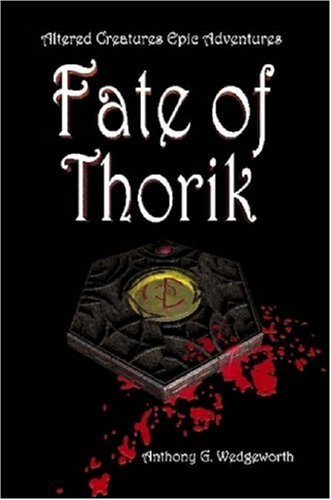 Fate of Thorik
Anthony G. Wedgeworth
The Grand Council convenes to determine action against a powerful leader. But before any consensus can be made, an immense power is unleashed, annihilating their temple and killing the council members inside. Young Thorik Dain's journey to discover who destroyed the council, leads him on an unexpected quest. Struggling to find the truth, Thorik confronts an entirely new world with overwhelming magic, altered beasts, battle-risen undead, and deceivers amongst his closest allies. Weighing upon Thorik's shoulders are his uncle's desire to control him, his mentor's obsession to vanquish the new rising leader, and Thorik's own internal demons of self-doubt. The land's destiny is in Thorik's hands, while his confidence and conviction to his beliefs will define his own fate. Read more at www.AlteredCreatures.com
1 Vote

From the first sentence, this book grabs you and doesn't let you go. The action moves at a breathtaking pace from the quiet, charming village of Shorview where the Nums spend their days hunting, fishing, and caring for their families, to the awe-inspiring, divine city of Kingsfoot, to the city of Weirfortus where the climax between Darkmere and Ambrosius takes place, you hardly get a moment to catch your breath. Locations are described in minute detail so that you actually feel as if you are walking next to Thorik and his band.