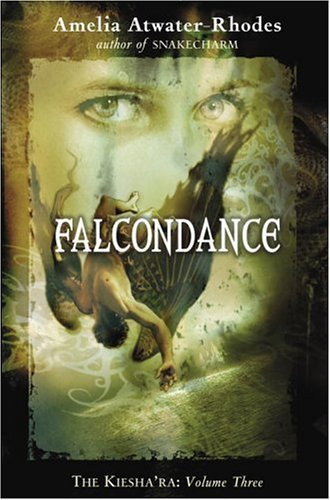 Falcondance
Amelia Atwater-Rhodes
Nicias has never felt completely at home among the avians and serpiente in Wyvern’s Court, despite his loyalty to Oliza Shardae Cobriana, the heir to both thrones. He is a falcon, the son of two exiles from Anhmik–and images of this distant island have always haunted his dreams. But when Nicias’s visions become more like reality, his parents have no choice but to send him back to the homeland–and a royal falcon–they’ve tried their best to forget.If Araceli won’t bind Nicias’s newfound magic, it could destroy him. In a place where everyone is a pawn, only one other woman has the potential to save Nicias. But she holds the keys to a dangerous power struggle that will force Nicias to choose between his duty–and his destiny.
2 Votes

When Nicias Silvermead's falcon magic reveals itself in his blood, he flies to Ahnmik to get help from his grandmother. Even though he is a falcon, his parents have not told him much of his heritage. They themselves are exiles from Ahnmik. Nicias finds the city mesmerizing, yet he knows that his true home is the Wyvern's court. During his stay in the city he finds out many startling details of his past, including why his parents made the decision to leave Ahnmik. He becomes entangled in a web of lies and deception.

What's this?
Falcondance review by HG

While the first two of the trilogy focus on the story of Danica Shardae and Zane Corbrianna, and therefore the joining of two sworn communities of enemies. The third and final book in Amelia Atwater-Rhodes trilogy looks at the past. Nicias, a falcon, never felt at ease amongst the avians and serpiente, once sworn enemies but united in the first two books, although loyal to the heir of both thrones; Oliza Shardae Cobrianna.