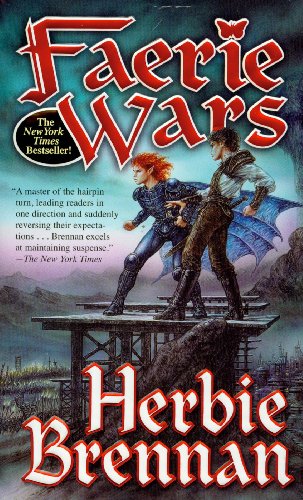 Faerie Wars
Herbie Brennan
Henry Atherton thinks his life is spinning out of control. But nothing prepares him for the invisible portal in old man Fogarty's backyard . . . and the unexpected stranger who comes through it. Pyrgus Malvae, crown prince of the Faerie realm, is on the run. Too many people want the rebellious young heir dead: a scheming sorcerer, a powerful demon, the malignant leader of the Faeries of the Night, and maybe even a hidden traitor within his father's court. Henry and Pyrgus come from very different worlds, but it may be up to Henry to save all of Faerie from being conquered by the Nightside, even if it means crossing over to a magical realm where nothing is ever what it seems . . . and no one can be trusted.
1 Vote

Henry Atherton is an average boy. When he wakes up on a not so average day, he finds out several things. First of all, his parents' relationship is ruined because his mother is having an affair with his dad's secretary. Secondly, when he goes to work for old Mr. Fogarty, he finds a mysterious fairy named Pyrgus Malvae, the Crown Prince. Pyrgus is from a different world, the Faerie Relm, and he is next in line for Emperor. He doesn't care for politics too much, anyway.