Excalibur: The Legend of King Arthur 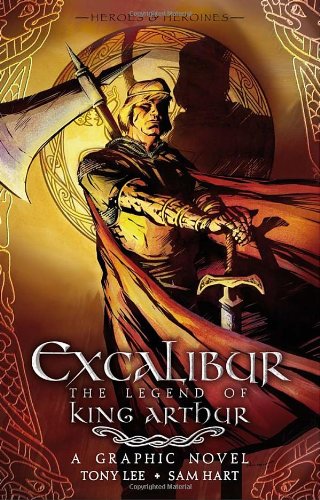 Excalibur: The Legend of King Arthur
Sam Hart, Tony Lee
The Arthurian legend springs to life in another powerhouse graphic novel from the creators of OUTLAW: THE LEGEND OF ROBIN HOOD.Arthur Pendragon was raised in obscurity, but fate will not leave him to the shadows. In a moment of desperate need, he draws a legendary sword from its stonebed and commences the life he was born to lead. A series of adventures sparked by the elusive wizard Merlin launches Arthur through love and betrayal, domination and defeat, and toward the prophesied end awaiting him. Merging a faithful retelling with dynamic illustrations, EXCALIBUR invites long-time fans to relive the legend and those new to the story to experience it up close in a vivid graphic adventure.
1 Vote

Tweet
Excalibur: The Legend of King Arthur review by NBru

The graphic novel starts off when young Arthur pulls the legendary sword Caliburn from the stone. Ulric, the current king of Britain, challenges Arthur to a duel at dawn. Arthur accepts. Merlin takes Arthur to the Faerie Realm to train for 2 years and a day. When he gets back Arthur is 17 years old and trained in the art of fighting, kingship, warcraft, and politics. He wins the duel and becomes the king over Britain. King Arthurs evil half- sister Morgana sends Merlin 7 years into the future. When he gets back King Arthur had already married Lady Guinevere and built Camelot.