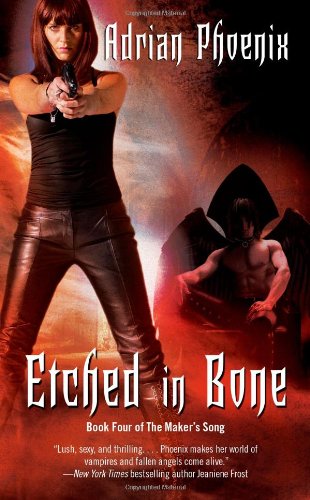 Etched in Bone
Adrian Phoenix
SON OF A FALLEN ANGEL. FORGED IN VAMPIRE’S BLOOD. SWORN TO A MORTAL WOMAN. IF DANTE FALLS, THE WORLD FALLS WITH HIM. . . . THREE LEGACIES ETCHED IN BONE More beautiful and powerful than any creature the world has ever seen, Dante Baptiste has become the supreme target of the three worlds that spawned him. The mortal agents of the Shadow Branch have tried to control his mind through psychological torture. The vampire elders who guide nightkind society have plotted to use him in their bloodthirsty bid for power. And the Fallen have waited for millennia for Dante to claim his birthright as their Maker. But Dante belongs to no one—except the woman he loves. . . . ONE PASSION SWORN IN BLOOD Determined to face the Fallen and the world on his own terms, Dante hopes to piece together his shattered past and claim his future, with FBI agent Heather Wallace at his side. But in Heather’s human family awaits an unexpected enemy. One who could rip Heather from Dante’s heart and fill the holes with bullets. One who could force Dante to choose his darkest destiny—as the Great Destroyer. . . .
1 Vote

This is the fourth book in "The Maker's Song" series. The main character is a human female named Heather who has bonded to a half vampire, half fallen angel named Dante. The plot is centered around Dante's struggle with his things from his past coming back to haunt him as well as the different groups in the magical community pulling him in multiple directions. He also has to deal with his own mind betraying him as he was, perhaps irrevocably, tortured while growing up as part of a covert assassination group.