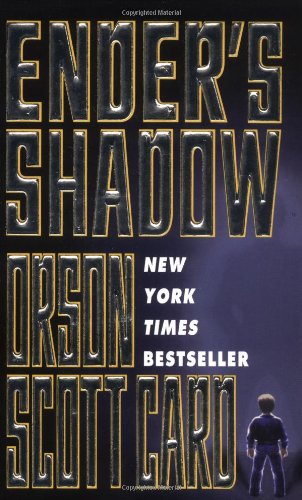 Ender's Shadow
Orson Scott Card
The novel that launched the bestselling Ender's Shadow series. The human race is at War with the "Buggers," an insect-like alien race. As Earth prepares to defend itself from total destruction at the hands of an inscrutable enemy, all focus is on the development of military geniuses who can fight such a war, and win. The long distances of interstellar space have given hope to the defenders of Earth--they have time to train these future commanders up from childhood, forging them into an irresistible force in the high orbital facility called the Battle School. Andrew "Ender" Wiggin was not the only child in the Battle School; he was just the best of the best. In Ender's Shadow, Card tells the story of another of those precocious generals, the one they called Bean--the one who became Ender's right hand, part of his team, in the final battle against the Buggers. Bean's past was a battle just to survive. His success brought him to the attention of the Battle School's recruiters, those people scouring the planet for leaders, tacticians, and generals to save Earth from the threat of alien invasion. Bean was sent into orbit, to the Battle School. And there he met Ender....THE ENDER UNIVERSEEnder seriesEnder’s Game / Ender in Exile / Speaker for the Dead / Xenocide / Children of the MindEnder’s Shadow seriesEnder’s Shadow / Shadow of the Hegemon / Shadow Puppets / Shadow of the Giant / Shadows in FlightChildren of the FleetThe First Formic War (with Aaron Johnston)Earth Unaware / Earth Afire / Earth AwakensThe Second Formic War (with Aaron Johnston)The Swarm /The HiveEnder novellasA War of Gifts /First Meetings
1 Vote

This sequel to Ender's Game was great. It follows Ender's friend, Bean, through his time at the Battle School and his life before. It really used Enders Game, the first book, as a basis for the characters and setting.