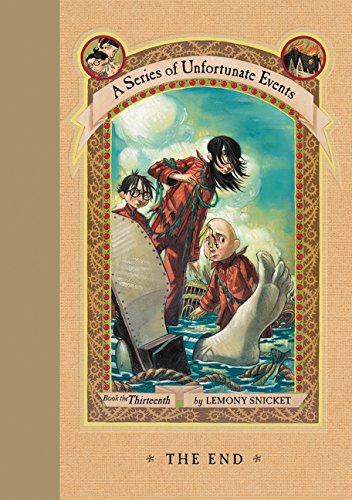 The End
Michael Kupperman, Brett Helquist, Lemony Snicket
Picking up from the final pages of the Pentultimate Peril, this farewell installment to the ridiculously (and deservedly!) popular A Series of Unfortunate Events places our protagonists right where we last left them: on a large, wooden boat in the middle of the ocean, trapped with their nemesis Count Olaf, who has armed himself with a helmet-full of deadly Medusoid Mycelium. The situation quickly and--this being the Baudelaires--predictably deteriorates. Violet, Klaus, and Sunny find themselves tossed in a storm so terrible that our beloved narrator spends four pages describing how he cannot describe it. From this point on, fans of the series' smarty-pants wordplay and acrobatic narrative can rest assured that they're in for more of the same (and how) in this 368-page finale, and Daniel Handler's deadpan Snicket continues to tutor a generation in self-referential humor (including one particularly funny bit regarding three very short men carrying a large, flat piece of wood, painted to look like a living room). Snicket notes, of course, that if you read the entire series, "your only reward will be 170 chapters of misery in your library and countless tears in your eyes." There's one big question, though, for anyone who's made it through "the thirteenth chapter of the thirteenth volume in this sad history": is the final book a fitting end? That question is probably best-answered by one of The End's most oft-repeated phrases: It depends on how you look at it. Those looking for conclusive resolution to the series' many, many mysteries may be disappointed, although some big questions do get explicit answers. Not surprisingly for a work so deliberately labyrinthine, though, even the absence of an answer can be sort of an answer--and reaction to The End can be something of a Rorschach test for readers. Or, as Lemony Snicket says, "Perhaps you don’t know yet what the end really means." --Paul Hughes
1 Vote

In The End, Clause and Sunny and Violet, all get shipwrecked on a coastal shelf, along with Count Olaf that is. They meet a girl named Friday, who takes them back to her village to meet Ishmael, who likes to be called Ish. She leaves Count Olaf behind because he is a wicked man. The Baudelaires are made get rid of all their possessions, including Clauses commonplace book, Violets hair ribbon, and Sunnys whisk. They are put into white robes (that is what the whole village is made to wear) and must drink coconut cordial, the only drink found on the island except salt water.