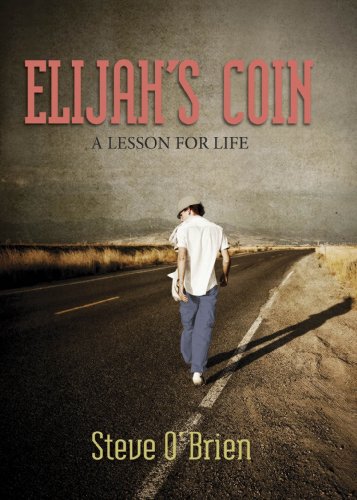 Elijah's Coin
Steve O'Brien
Book of the Year, Fiction--Books and Authors Winner, Novella, Next Generation Indie Book Awards Winner, Fiction and Literature, Young Adult Fiction--National Best Books Awards Winner, Teen-Young Adult Fiction, Reader Views Literary Awards Silver Medalist, Men's Fiction, Living Now book Awards Silver Medalist, Audio and Spoken Word, Nautilus Book Awards Silver Medalist, Mid-Atlantic Best Regional Fiction, Independent Publisher Book Awards Finalist, Audio Book of the Year, ForeWord Magazine Finalist, Best New Fiction--National Indie Excellence Awards Steve O'Brien has crafted a new work of fiction that successfully negotiates the tricky balance between entertainment and instruction. Overtly didactic in some ways, Elijah's Coin is also a highly suspenseful story that introduces us to characters we come to care about. The content is edifying and thought-provoking, but the story never becomes dry. Elijah's Coin is the story of Tom, a young man who has suffered a tragic loss and is spiraling out of control. He's angry, anti-social, and rapidly descending into a life of crime. Then, during a night of folly, as he brazenly commits burglary, Tom encounters the night watchman Elijah King, a mysterious figure with a shrouded past. Elijah, unexpectedly, doesn't turn Tom in but instead becomes a stern and rather cryptic mentor to him. Rather than laying his lessons out in a straightforward manner, Elijah gives Tom an enigmatic coin and sends him on a mission of self-discovery. The remainder of Part One of the story chronicles Tom's quest to find three powerful, respected men - an entrepreneur, a courtroom lawyer, and a philanthropist whose lives were forever changed through their own encounters with Elijah. Each step of the journey enriches Tom's sense of the world and of the contributions an individual can make to it, so that through searching for others he ironically comes to know himself. Each meeting also provides a piece of the puzzle that is Elijah and his give-to-get philosophy. Nonetheless, Tom becomes increasingly desperate to find Elijah himself again. The few clues he pieces together ultimately disclose a shocking truth. In Part Two, Tom lives the message, learns to trust his own instincts and uniqueness, and becomes himself a mentor to other individuals on the verge of being lost. Each new, unexpected arrival, directed Tom's way by Elijah, presents its own difficulties. In dealing with these challenges, Tom is forced to discover resources within himself he had never suspected. A serious conflict between his new values and a thirst for vengeance arises, however, when Tom finds himself face-to-face with the darkest figure from his own past.... Author Steve O'Brien is an experienced litigator and international businessman who serves as General Counsel for a global consulting company. With Elijah's Coin, he turns his hand to fiction and draws upon his business and legal experience to create convincing scenes with corporate and courtroom settings. Engaging, thoughtful, and ultimately profound, Elijah's Coin is a rare example of a work of fiction that aspires to transform its readers. As the great German poet Rainer Maria Rilke once wrote: Du musst dein leben andern ( You must change your life ). Elijah's Coin poses the same challenge through a story about inner growth that will inspire readers everywhere.
1 Vote

Emotion bleeds from the pages of Steve O'Brien's "Elijah's Coin: A Lesson for Life." The protagonist Tom is a renegade teen with selfish ambitions and a severed childhood. During one of his acts of self preservation, he encounters a mysterious man who gives him his two cents (literally and figuratively). Tom is confused but intrigued and tries to find this mystery man. With only words of wisdom and the coin the title refers to, Tom sets off on a journey that will change his life.