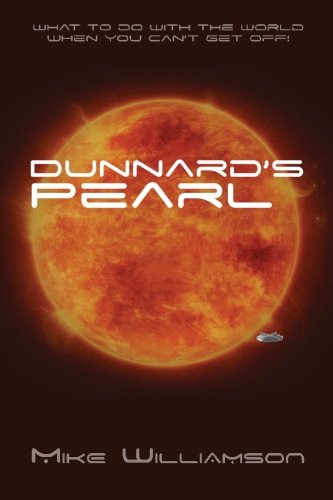 Dunnard's Pearl
Mike Williamson
People are remarkably adaptable. If you ruin them slowly enough they barely notice! Humans and aliens take on the establishment in Mike Williamson’s funny and thought-provoking debut, Dunnard’s Pearl. Part-time teenage idealist James Justice is transported to a strange world from the playing-fields of his London school. Despite the bright, new surroundings, the same dirty, old tricks are being enthusiastically employed by a self-serving government to fleece the people. James promises to champion the down-trodden and stumbles upon two more earthlings who have also found themselves mysteriously beamed aboard the ‘Vortex’. Together, the three teenagers tread a fine line as they attempt to play along with the powers that be while desperately seeking a way to return home. They find themselves thrust into the company of a very soft alien couple, are recruited for a reality television show, and learn the awful secret that the Administrators are determined to hide. As they try to avoid this awful fate, James and his allies face a final, violent showdown with the Grand Administrator. Will they win? Will they ever find a way to return to their homes?