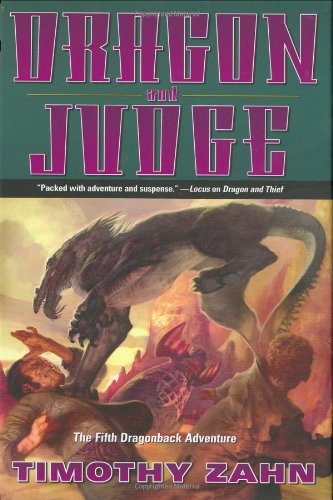 Dragon and Judge
Timothy Zahn
Orphaned at the age of three, brought up by his Uncle Virgil, a con man, Jack Morgan has done things that are unusual even in the future in space. But when he rescued Draycos, a dragon-like symbiont, from certain death, his life became a series of breathtaking adventures. With the help of Draycos, who can leap onto Jack's back and become what looks like a tattoo, Jack has been doing everything he can to find out who ambushed the scout-fleet of Draycos's people, the K'da and Shontine, leaving Draycos the sole survivor. Now Jack thinks he may finally be on the trail of the information he needs. But before he can act on what he knows, he's kidnapped by aliens, who ask him to be a judge for them, as, they reveal to him, his parents had once been. Jack's friend Alison Kayna and her newly acquired K'da symbiont are also kidnapped, by the people trying to ambush the K'da/Shontine fleet. Her captors will do almost anything to learn from Alison where the fleet will rendezvous. Jack and Draycos must rescue her before Alison is hurt--or worse. Using every trick in the book, Jack and Draycos race to her aid, but they aren't able to eliminate the threat to the endangered fleet...and precious time is running out!
1 Vote

Jack Morgan is a fourteen year old orphan with Draycos a K'da poet warrior dragon on his back. If you read any of the previous books there is no need to try to explain that last sentence and if you didn't this probably isn't the book you should be reading first. In the latest Dragonback series book Jack Morgan is trying to find out the mystery of how his parents died. While his friend who is a girl, Alison Kayna, is trying to get away from the group of people that is trying to kill Draycos' people.