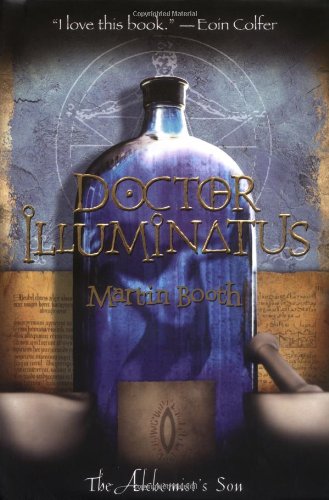 Doctor Illuminatus
Martin Booth
After accidentally waking an alchemist's son from a long, long sleep, Tim and Pip befriend their new friend Sebastian and work with him to stop his recently awakened enemy from going forth with his evil deed of making a human man out of dead materials.
2 Votes

Pip and Tim move into an ancient English home, Rawne Barton, built in 1422. As soon is they are settled they notice that there is another person in the house. They uncover a boy, Sebastian, who has slept in the house for almost 600 years. The explanation he gives Pip and Tim is that his father was a great alchemist who fought an evil alchemist named de Loudéac. Also, he says that, just before Sebastian's father was going to be burned at the stake, around 1440, he told his son to continue his fight against de Loudéac.

The book begins with the Ledger family moving into an old remodeled house called Rawne Barton. It is an over 500-year old country estate in now modern day England. The children, Pip and Tim, meet a mysterious twelve-year-old boy named Sebastian who has secretly been living beneath this house for 500 years. He informs them that there is an evil force living in this world that he must defeat, and if the children help & they can rid the world of the evil.