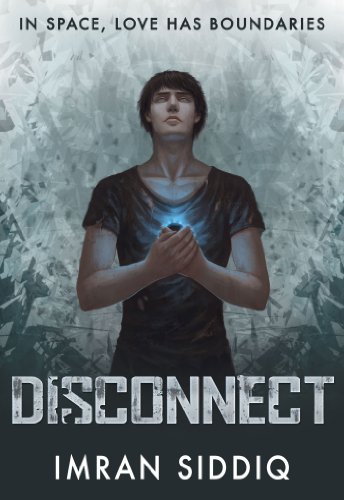 Disconnect: The Divided Worlds Trilogy #1
Imran Siddiq
Dirtying fingernails in sewers is fast approaching worthlessness for Zachary, a 16-year old Underworld scavenger. When footage of an Overworld girl, Rosa, is discovered, his intrigue heightens at why she expresses sadness with a lavish lifestyle.In meeting Rosa, Zachary is scorned by her opinion of the deprived. She pities him and provides a means for them to communicate. With time, friendship and something he’s never felt grows; love for another human. Knowing Rosa calls him when it suits her isn’t enough; he wants to meet her, but how? Relationships in Underworld are few, let alone the impossibility with those above the ceiling.Underworld will suffer when plans to conquer Jupiter’s moon, Europa move ahead. Worse is Rosa’s father, a disgraced Overworld ambassador, approving the plan.Zachary must defeat the prejudice of the worlds, sneak within opposing forces, lose friends and challenge Rosa’s sadness. In doing so, a twisted secret is uncovered that may devour the reason he lives; Rosa.In space, love has boundaries.About the AuthorImran Siddiq may have tried to leave Leicester a few times, but its become his place to wake up to two cats, freeze when the heating’s off and most of all, get down to writing. During a night in the jungle (2007), the bug inside awakened, and since then he’s been sacrificing every second that he can to write. A veteran of writing festivals, a presence on Twitter and always reading to find new worlds. His preferred genre is Science Fiction in YA, though will meddle with fantasy. He has a tendency to throw a droid in every novel – literally.

Review from Amazon of Disconnect: The Divided Worlds Trilogy #1:
"My favorite thing about the author's writing style is that its clean and concise. Too many authors use too many words trying to sound like J.R. Tolkien or someone similar but this author writes in perfect clarity. Details are crisp and feelings are instantly gratified because you don't ever have to wonder about what's happening, what's being seen/said/done...I don't know how to explain it. Just clear, wonderful writing and a story that I've been wishing for ever since I watched Mad Max for the first time last year (I know I missed out my WHOLE life and didn't even know it)."
-- Jennifer Elizabeth Hyndman