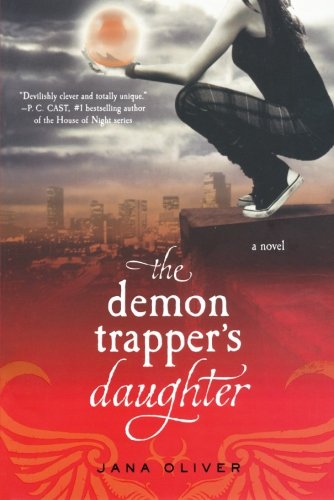 The Demon Trapper's Daughter
Jana Oliver
The Demon Trapper's Daughter is the first novel in Jana Oliver's Demon Trappers―a spellbinding young adult fantasy series. Riley Blackthorne just needs a chance to prove herself―and that's exactly what the demons are counting on…Seventeen-year-old Riley, the only daughter of legendary Demon Trapper Paul Blackthorne, has always dreamed of following in her father's footsteps. The good news is, with human society seriously disrupted by economic upheaval and Lucifer increasing the number of demons in all major cities, Atlanta's local Trappers' Guild needs all the help they can get―even from a girl. When she's not keeping up with her homework or trying to manage her growing crush on fellow apprentice, Simon, Riley's out saving distressed citizens from foul-mouthed little devils―Grade One Hellspawn only, of course, per the strict rules of the Guild. Life's about as normal as can be for the average demon-trapping teen.But then a Grade Five Geo-Fiend crashes Riley's routine assignment at a library, jeopardizing her life and her chosen livelihood. And, as if that wasn't bad enough, sudden tragedy strikes the Trappers' Guild, spinning Riley down a more dangerous path than she ever could have imagined. As her whole world crashes down around her, who can Riley trust with her heart―and her life?
1 Vote

Riley has grown up knowing exactly what her career is going to be: a demon trapper. Most people may think it is a strange profession, but since her father is the legendary trapper, Paul Blackthorne, she feels she has to follow in his footsteps. Not many of the co-workers in her Guild like the way she traps though. They think that this job is just too dangerous for her and that she isn't smart or strong enough to catch the upper level demons. Then, something terrible happens that makes Riley's responsibilities grow even bigger than they already are.