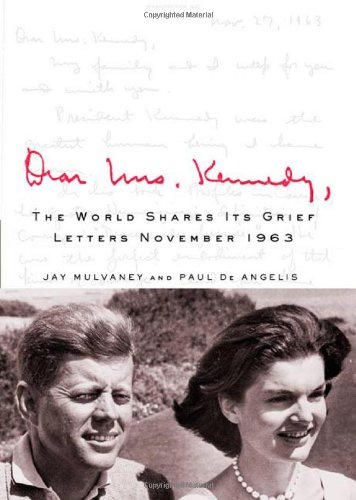 Dear Mrs. Kennedy
Paul De Angelis, Jay Mulvaney
From the bestselling author of Kennedy Weddings and Diana and Jackie comes a powerful and moving collection of the condolence letters Jacqueline Kennedy received after the assassination of John F. KennedyIn the weeks and months following the assassination of her husband, First Lady Jacqueline Kennedy received more than one million letters. The impact of President Kennedy's death was so immense that people from every station in life wrote to her, sharing their feelings of sympathy, sorrow, and hope. She received letters from political luminaries such as Winston Churchill, Martin Luther King Jr., and Charles De Gaulle. Hollywood stars like Lauren Bacall, Vivian Leigh, and Gene Kelly voiced their sympathy, as did foreign dignitaries including Queen Elizabeth II, the King and Queen of Greece, and the Prince of Monaco. Distinguished members of the arts and society―Ezra Pound, Noel Coward, Babe Paley, Langston Hughes, Oleg Cassini, Josephine Baker―offered their heartfelt condolences. And children, with the most heartbreaking sincerity, reached out to the First Lady to comfort her in her time of grief.More than just a compendium of letters, Dear Mrs. Kennedy uses these many voices to tell the unforgettable story of those fateful four days in November, when the world was struck with shock and sadness. It vividly captures the months that followed, as a nation---and a family---attempted to rebuild.Filled with emotion, patriotism, and insight, the letters are a poignant time capsule of one of the seminal events of the twentieth century. Dear Mrs. Kennedy offers a diverse portrait not only of the aftermath of the assassination, but of the Kennedy mystique that continues to captivate the world.
1 Vote

DEAR MRS. KENNEDY explores the assassination of John Fitzgerald Kennedy. In the book, the reader is given the opportunity to read some of the most poignant letters sent to Mrs. Kennedy after the tragedy. These letters demonstrate the compassion given to the First Lady and they also show the impact that one man had on the lives of so many. This book gives an astute impression of what it was like to live through such a historically tragic event.