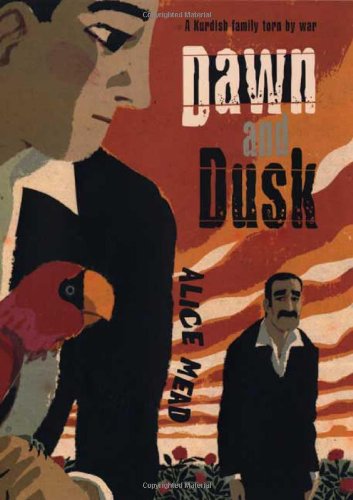 Dawn and Dusk
Alice Mead
For as long as thirteen-year-old Azad can remember, the Islamic Republic of Iran, where he lives in the predominantly Kurdish town of Sardasht, has been at war with Saddam Hussein's Iraq, and his country has been a harsh society full of spies, secrets, and "disappearances." Still, most of the time Azad manages to live a normal life, hanging out at the bakery next door, going to school with his friend Hiwa, playing sports, and taking care of his parrot. Then Azad learns that his town may soon become a target for Saddam's weapons of mass destruction. Now more than ever, Azad feels torn between his divorced parents and his conflicting desires to remain in his home or escape. His father is somehow connected to the police and is rooted in the town. His mother may be part of the insurgency, yet is ready to flee. How can Azad make the choice? The story of how one boy's world was turned upside down in 1987 Iran is a timely and memorable introduction to the conflicts in the Middle East.
1 Vote

Dawn and Dusk, by Alice Mead, is an emotional story about a young boy, Azad, whose life is torn by war. His parents are divorced but he doesn't know why and everyone thinks he's too young to know. His town, Sardasht, is located in the Islamic Republic of Iran which has been at war with Iraq for a very long time. One day, Saddam bombs Sardasht with chemical bombs that destroys Azad's life forever. His mom wants to run away to another town or even country but his dad, who has connections to the secret police, wants to stay. What should Azad do, stay or flee?