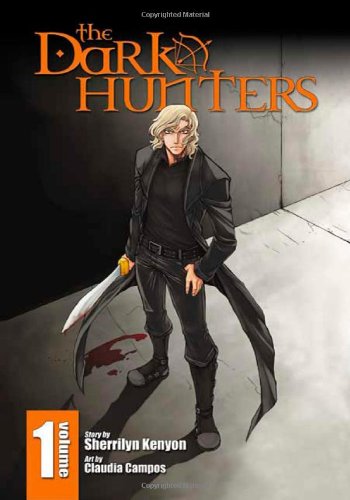 The Dark Hunters
Claudia Campos, Sherrilyn Kenyon
In the war against vampires, mankind has only one hope: The Dark-Hunters. Ancient warriors who died of brutal betrayal, the Dark-Hunters have sworn themselves into the service of the goddess Artemis to protect us. It's a pact with pretty good perks. Immortality, power, psychic abilities, wealth and a cool wardrobe. But it comes with a few drawbacks: fatal sun poisoning and a new, irreparable dental problem. But aside from the fangs and nocturnal lifestyle, it's not so bad.  Until Kyrian meets the most frightening thing imaginable. An accountant who's being hunted by one of the most lethal vampires out there. If Amanda Devereaux goes down, so does he and no offense, he doesn't want to die (hence the whole immortality thing). And he doesn't want humanity dead either which is a good thing for us since he and Amanda are all that stands between us and oblivion. Let's hope they win.  From the wild imagination of Sherrilyn Kenyon comes the humorous and suspenseful manga debut of the #1 internationally bestselling Dark-Hunter series. The world of manga will never be the same again. Look Inside The Dark-Hunters, Vol. 1Meet Dark-Hunters Kyrian of Thrace and Tabitha Devereaux and get caught up in the vampire slaying action. Click on each panel to see the full page. "[His] destiny is to save the very mortals who despise and fear him" "Neither man nor beast, he is something else entirely" "The worst thing about this whole Cliff situation is that I don't miss him" "I can't marry a woman with a family like that"
1 Vote

Kyrian is a man who was born rich and lived his life without fear of anything around him. One day he was beaten and killed because his wife poisoned him. After his death, he was offered a chance to live again if he became a Dark Hunter. To become a Dark Hunter, you have to sell your soul. A Dark Hunter is immortal and each one has different powers. The bad part is that if you get caught in the sun's rays, you die again. Dark Hunters fight against the evil Daimons who are just like Dark Hunters only they suck human blood.