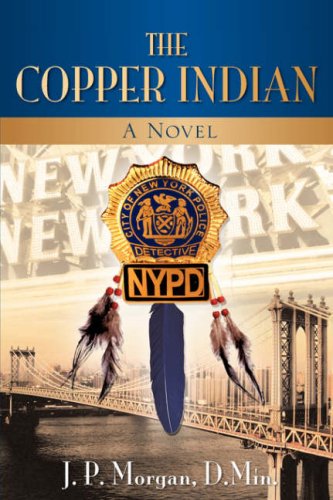 The Copper Indian
J. P. Morgan
Police work is fun, and unorthodox, in the 1950s and '60s. The booking of a dead man; making a prisoner pay for his taxi ride to jail; and the disappearance of a corpse are all part of a day's work. In The Copper Indian, the reader has an inside look at the skimming of drugs and money, and learns how bounty driven narcs make arrests based on intuition and profiling. This novel combines the suspense, humor, and action encountered by an idealistic and frustrated Native American, Jim Utze, when he joins the NYPD, one of the most storied cultures of society in the mid-twentieth century. Jim longs for the days of the Wild West when good people helped the weak and oppressed. The Lone Ranger radio show that he listened to in the 1930s as a youth provides the heroes he wants to emulate. All too often, however, a police situation arises where it appears that the end can justify the means. When the erosion of his integrity becomes too prevalent, Detective Utze questions his continuing acceptance of the system. Even his girlfriend Ruth, an Israeli mystery woman, becomes an enigma, especially when Jim suspects she may have played a part in the use of his personal weapon in an assassination. The author has almost forty years' involvement in law enforcement, with active experience at the municipal, state and federal levels, advancing to Chief in the first two and FBI Special Agent Supervisor in the latter. In academia, Dr. Morgan rose to the levels of tenured Associate Professor of Police Management and Chairman of the Department of Criminal Justice at Virginia Commonwealth University, and Director of the Police Science Division at the University of Georgia. His doctorate in theology exemplifies the diversity of his background.
1 Vote

Jim Utze grew up in New York listening to the radio show: The Lone Ranger, and to stories about his Native American ancestors. Always wanting to be just like his hero The Lone Ranger, Jim started a career in law enforcement. He started working for the NYPD in the 1950's. In this book you will learn what it's like living in the footsteps of Jim Utze. You will learn about his crazy arrests, and his life on and off the job. I recommend this book for anyone who loves mystery and crimes.