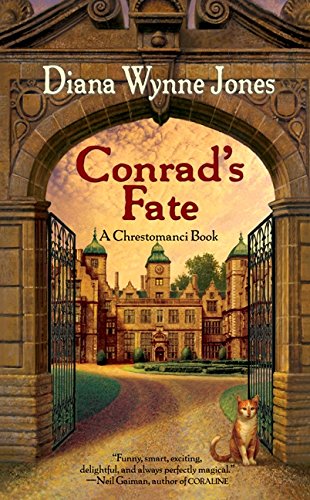 Conrad's Fate - A Chrestomanci Book
Diana Wynne Jones
Someone at Stallery Mansion is changing the world. At first, only small details, but the changes get bigger and bigger. It's up to Conrad, a twelve-year-old with terrible karma who's just joined the mansion's staff, to find out who is behind it.But he's not the only one snooping around. His fellow servant-in-training, Christopher Chant, is charming, confident, and from another world, with a mission of his own -- rescuing his friend, lost in an alternate Stallery Mansion. Can they save the day before Conrad's awful fate catches up with them?
1 Vote

Series Seven is one of eleven parallel universes. That is where Conrad Tesdinic, the main character, lives in the small village of Stallchester. As he turns twelve, his uncle, who is a magician, tell Conrad he has horrible karma. Then he is sent off to become a servant at Stallery, the mansion in the mountains above Stallchester. His uncle tells him that that is where he can settle his fate. There he meets a boy about his age named Christopher. Christopher reveals to Conrad that he is an enchanter from Series Twelve and is looking for a lost friend.