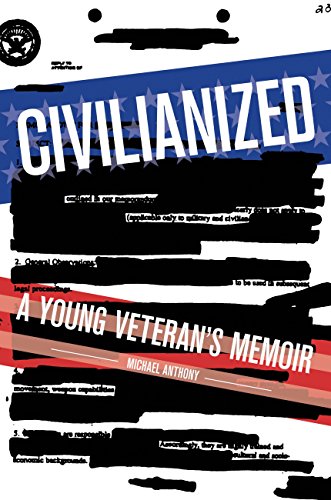 After twelve months of military service in Iraq, Michael Anthony stepped off a plane, seemingly happy to be home--or at least back on US soil. He was twenty-one years old, a bit of a nerd, and carrying a pack of cigarettes that he thought would be his last. Two weeks later, Michael was stoned on Vicodin, drinking way too much, and picking a fight with a very large Hell's Angel. At his wit's end, he came to an agreement with himself: If things didn't improve in three months, he was going to kill himself. Civilianized is a memoir chronicling Michael's search for meaning in a suddenly destabilized world.
2 Votes

What's this?
Civilianized: A Young Veteran's Memoir review by PhilipDeGroot

Just returning from a year in Iraq, about to be reunited with his family, it would seem as if Michael Anthony's life is going to return to normal. Unfortunately, however much his time in Iraq messed with his mind, returning has messed it up even more. Stuck inside are memories of bad soldiers being promoted, good soldiers dying, and good people screwing up. As these memories swirl inside his head, he begins to wonder if there is any point in living. He tries to forget through drinking and drugs; he tries to find fulfillment through women.