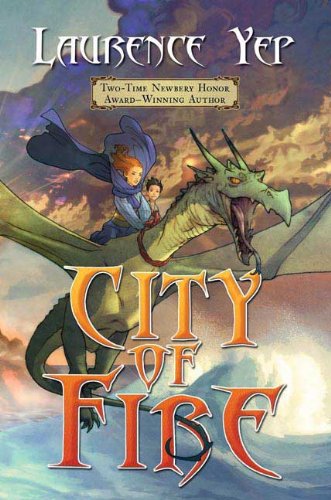 City of Fire
Laurence Yep
Two-time Newbery Honor Award-winning author Laurence Yep kicks off an action-packed new fantasy trilogySure to appeal to fans of Rick Riordan and Eoin Colfer, this action-packed tale takes readers on an unforgettable journey through an alternate version of our world in 1941—a world filled with magical beings such as dragons in human form, tiny “lap griffins,” reincarnations of legendary Chinese warriors, Japanese folk creatures, and goddesses in disguise. When her older sister dies trying to prevent the theft of one of her people’s great treasures, twelve-year-old Scirye sets out to avenge her and recover the precious item. Helping her are Bayang, a dragon disguised as a Pinkerton agent; Leech, a boy with powers he has not yet discovered; and Leech’s loyal companion Koko, who has a secret of his own. All have a grudge against the thieves who stole the treasure: the evil dragon Badik and the mysterious Mr. Roland. Scirye and her companions pursue the thieves to Houlani, a new Hawaiian island being created by magic. There, they befriend Pele, the volatile and mercurial goddess of volcanoes. But even with Pele on their side, they may not be able to stop Mr. Roland from gaining what he seeks: the Five Lost Treasures of Emperor Yu. Together, the treasures will give him the power to alter the very fabric of the universe.
1 Vote

The book, the City of Fire is an action-packed tale of magic and adventure. It is based in the year 1941, except it's changed. For this book, earth is a place where fantasy is reality. However, when Mr. Roland, a rich businessman, decides he wants to find 5 magical objects that give him unimaginable power, it up to an unusual band to stop him. For if they don't, the universe itself could be under Mr. Roland's control. The City of Fire will take you on a winding path that keeps you on the edge of your seat at all times.