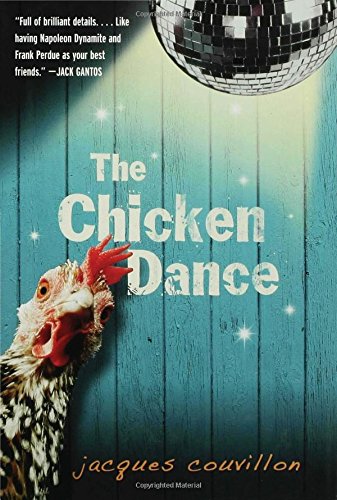 The Chicken Dance
Jacques Couvillon
On his birthday, Don Schmidt spends the day waiting patiently for his big surprise―a cake, presents, maybe a Chinese clown . . . . But instead, his batty parents get into their monthly argument. This time it's because his mother has to feed the chickens. It ends with her shouting the same thing as always about their Louisiana chicken farm: "I hate it here!" What follows is Don's journey from obscurity to fame and back again, when he becomes the youngest kid to ever win the Horse Island Dairy Festival chicken-judging contest. Gradually, his mom notices that something strange is going on―everyone knows her son!―but once she realizes that Don has become the town celebrity, she sees that there may be benefits to living on a chicken farm. What she doesn't seem to see are the benefits of having a son like Don. For Don, the contest is the beginning of a big, big adventure. It involves trips to New Orleans and Baton Rouge, fair weather friends, a missing sister, and one big secret. Readers will cheer for Don, who goes out of his way to see the good in everything.
1 Vote

Don Schmidt lives on a chicken farm in Horse Island, Louisiana. He is unpopular at school as well as at home. He has absolutely no friends and everyone refers to him as "new kid," even though he has lived on Horse Island since kindergarten. At home his mother constantly refers to his dead sister Dawn, and thinks the world revolves around herself. Out of loneliness he befriends the chickens living in his backyard and they become his best friends. Don's luck soon changes when he becomes the youngest person ever to win the chicken-judging contest at the local dairy fair.