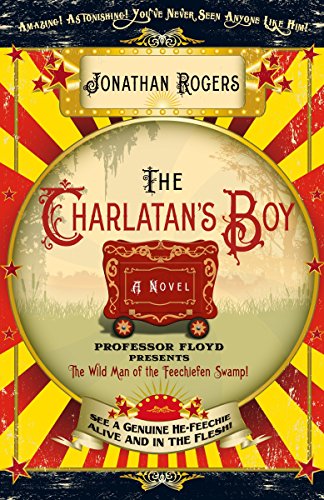 “I only know one man who might be able to tell me where I come from, and that man is a liar and a fraud.”  As far back as he can remember, the orphan Grady has tramped from village to village in the company of a huckster named Floyd. With his adolescent accomplice, Floyd perpetrates a variety of hoaxes and flimflams on the good citizens of the Corenwald frontier, such as the Ugliest Boy in the World act. It’s a hard way to make a living, made harder by the memory of fatter times when audiences thronged to see young Grady perform as “The Wild Man of the Feechiefen Swamp.” But what can they do? Nobody believes in feechies anymore.  When Floyd stages an elaborate plot to revive Corenwalders’ belief in the mythical swamp-dwellers known as the feechiefolk, he overshoots the mark. Floyd’s Great Feechie Scare becomes widespread panic. Eager audiences become angry mobs, and in the ensuing chaos, the Charlatan’s Boy discovers the truth that has evaded him all his life—and will change his path forever.
2 Votes

This adventure book starts off when Grady and Floyd are running a He-Feechie (swamp person) act. They soon have to stop due to the crowds disapproval. For about a year they do various acts to make a living. Finally Floyd hits up on a big idea to make a lot of money. He calls it the Great Feechie Scare. They are going to get the people of Corenwald scared of Feechies. After that Grady is going to act as a feechie and put on a show for money.

What's this?
The Charlatan's Boy review by NPer

Imagine what it would be like to have no memory of your family, to have never had a home, or even a single person that loves you. It has been like this for as long as Grady can remember. Every time they reach a new village its the same routine. The small boy dresses in his old opossum hides, muffs his hair, dirties his face, and then crawls into the old wooden crate. He shocks the frightened villagers so badly when he bursts out of the crate that they feel privileged to have paid their few coins to get a closer look at a real Feechie, the mysterious swamp people from the wilds.