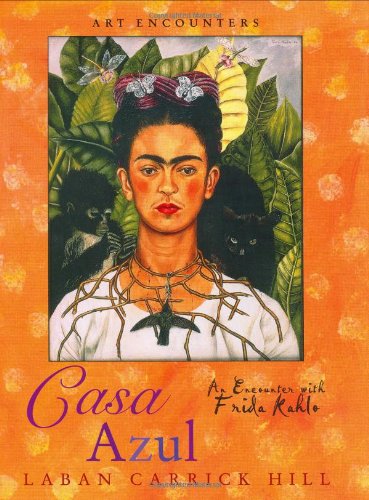 Casa Azul: An Encounter With Frida Kahlo
Laban Carrick Hill
Frida Kahlo's work comes to life—literally—in this magical realist novel, the latest addition to Watson-Guptill's acclaimed Art Encounters series. The story alternates between Kahlo's home in Mexico City, Casa Azul, and the journey of a teenage girl and her young brother, lost in the city. At the mystical Casa Azul, everything with a face talks—including Kahlo's pet monkey, her cat, portraits on the wall. Over the course of the book, the cover painting, Self-Portrait with Thorn Necklace and Hummingbird, transforms from a nightmarish vision of death into a life-affirming masterpiece. This dramatic story offers a vivid reimagining of the life and work of a woman as well known for her amazing life as for her amazing art.• Laban Hill is a National Book Award Finalist and recipient of the Parents Choice Gold Award• Frida Kahlo is one of the most popular artists among young people today-her art and her blazingly flamboyant style make her eternally up-to-date• Ties in to school curriculum in art and social studies
1 Vote

The simultaneous stories of Frida Kahlo following her divorce to Diego Rivera, Maria and Victor Ortiz in their search of their mother in Mexico City, and the wrestling match between El Corazon and El Diablo are told by Laban Carrick Hill in Casa Azul. Fourteen year-old Maria and her nine year-old brother, Victor, board a bus from their small village to go to Mexico City after the death of their grandmother. Maria seeks not only her mother, but also the independance she was denied in her village.