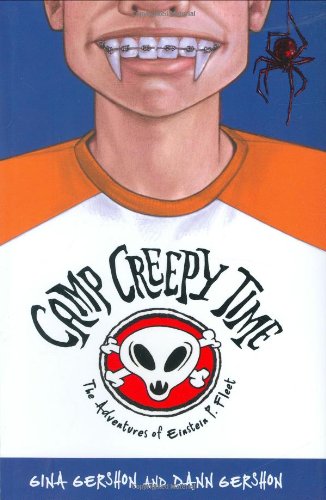 Camp Creepy Time
Dann Gershon, Gina Gershon
Einstein P. Fleet, a thirteen-year old computer whiz, is shipped off to camp in the middle of the Mojave Desert for a summer of fun and fresh air. The food sucks, the facilities are rotting, the camp is haunted, his fellow campers are turning into monsters, and his counselor are actually aliens that intend to abduct the kids and sell them to an intergalactic zoo. Einstein tries to relay his dire situation to his parents, but they don't believe a word of it. The only problem is that it's all true. leaving Einstein to save himself and the others. A hilarious blend of sci-fi and pop culture, which was optioned by DreamWorks for an upcoming motion picture.
1 Vote

Einstein P. Fleet is a normal teenage boy who is being forced by his parents to spend his summer in summer camp. Einstein's parents think they are sending him to a luxury camp for eight weeks, but instead of luxury they're sending him to a run-down, abandoned, haunted summer camp in the middle of the desert. While the campers are being turned into mummies, vampires, and werewolves by their evil alien counselors. Einstein will try to save the day with help by his alien friend Roxy.