Calico Horses and the Patchwork Trail 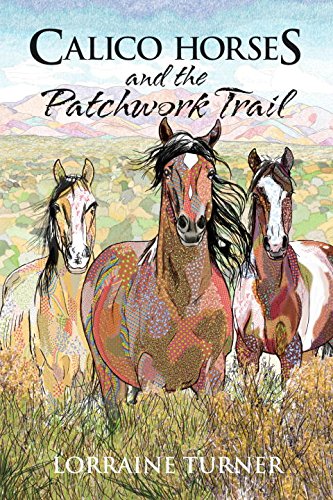 Calico Horses and the Patchwork Trail
Lorraine Turner
A Novel by Lorraine Turner When the Spirit of Horse speaks to a ten-year-old girl through her dreams and calico patches magically appear as if from nowhere, the residents of Saddlecrest, Nevada have a genuine mystery on their hands. It's the story of how a girl ripped apart by divorce helps the wild mustangs torn from the range. Together they face uncertainties brought on by the decisions of others. Carrie's mom decides to uproot her from their familiar Jersey Shore home and move to the dusty deserts of Nevada. The move is as prickly to Carrie as the cactus beside her new home. But something mysterious greets her when she closes her eyes each night—like a winding path, her dreams guide her to the horses of the Calico Mountains. Are her developing psychic abilities bringing visits from horse spirits or is her troubled mind playing tricks on her? Her new friend Milla has nightmares of her own—she's the daughter of a government official known as "The Horse Killer." How can a few children make a difference to the plight of the foals snatched from their homes without warning? Like the tiny patches of cloth that adorn a calico quilt the clues draw them all together. Follow the Calico Horses as they lead us down the trail of adversity to the peaceful pastures found by helping one another.
1 Vote

Tweet
Calico Horses and the Patchwork Trail review by Telmar

There were well over half a dozen main characters, but probably the two most closely followed by the author were Carrie—a ten year old girl who has to move to Nevada from New Jersey because of a divorce, and Milla—mother-less daughter of Devon, who takes care of wild horses after they are rounded up. Carrie and Milla become friends as the story takes a magical turn involving the Calico Mountains, quilts, meditation, Calico Horses, and these random squares of calico that seemingly fall from the sky.