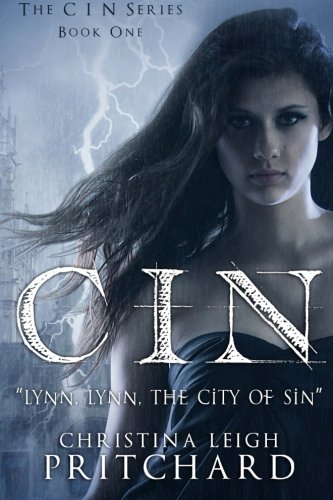 C I N
Christina Leigh Pritchard
The Doctor said I should be dead.My heart beat furiously. I looked up at the flashes of lightning in the sky. Yes, I should be dead.Why wasn't I?Seventeen year old Lisa Brown's life is falling apart. First, her mother and father divorce, then their house forecloses and now, her mother has decided to commit herself to a psychiatric hospital.If that weren't enough, she must leave sunny south Florida to attend a boarding school full of geniuses in cold, Lynn, Massachusetts. The city where the locals chant "Lynn, Lynn, city of sin; you never come out the way you went in."And, they aren't kidding. Lisa must live in a tiny shack with two strange teenagers, a dog named Pig who growls when you look at him and a cat named Rat. "Mind the cat," everyone says. What the heck is wrong with this place?Lisa thinks she's landed in her own house of horrors with the anti-social Alex and his facetious sister Ally. But, the real drama begins the day she is struck by lightning...Watch the book trailer!youtu.be/yRdrGVinWdQSubscribe: christinaleighpritchard.com/
1 Vote

Lisa Brown's life has just taken a turn for the worst. Her mother has decided to commit herself to a psychiatric ward, and leave Lisa with her Aunt in Lynn, Massachusetts. As if that isn't enough, this city is bizarre. The locals have a saying "Lynn, Lynn, the city of sin. You never come out the way you went in." Lisa must live in the local boarding school for geniuses, which her Aunt owns. There, she meets a dog named Pig, and a cat named Rat. "Mind the cat" everyone says.