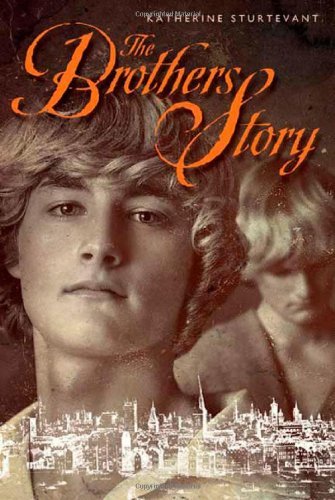 The Brothers Story
Katherine Sturtevant
Teenage twins Kit and Christy have grown up amid grinding poverty in their Essex village. As Christy has been “simple” from birth, Kit is literally his brother’s keeper. But the latest hardships visited upon their country home by the Great Frost of 1683–84 bring Kit to frustration and despair, and he abandons Christy to make his way to London, seeking to better himself. There he finds work as an apprentice to a struggling artist and much else to take his mind off what he has left behind. But the time comes when he can no longer ignore the problem of his brother. A fascinating portrait of a young person struggling to balance family and freedom, The Brothers Story is also a frank depiction of Restoration London in its bawdy, raucous glory.
1 Vote

The winter of 1683, the coldest winter ever recorded in England, has taken an terrible tole on Kit and his poor family. Kit dreams of going to London to find a job, but the only thing holding him back is his twin brother, Christy, who was born "simple". Since Kit has always looked after his brother and has never been separated, Kit isn't sure if Christy will survive without him. Frustrated and determined to better himself, in the end, Kit decides to abandon Christy in Essex and flee to the city. Once in London, Kit faces a world of opportunity and misfortune.