The Borribles: Go For Broke 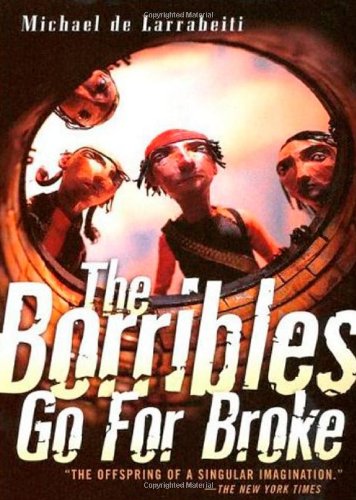 The Borribles: Go For Broke
Michael de Larrabeiti
What is a Borrible? Borribles are runaways who dwell in the shadows of London. Apart from their pointed ears, they look just like ordinary children. They live by their wits and a few Borrible laws--the chief one being, Don't Get Caught! The Borribles are outcasts--but they wouldn't have it any other way….The Borribles Go For BrokeOn the Great Rumble Hunt, Chalotte, a Borrible from Whitechapel, very nearly lost her life--and good friends had been left for dead--all because of the Rumble Treasure Chest. To Chalotte the treasure was evil and she had sworn never to go on another adventure. But when Chalotte and the other survivors discover that Sam the horse is in danger they know they have no choice--Borribles always help their friends. Their attempts to rescue Sam lead them into the second Great Borrible Adventure!
1 Vote

Tweet
The Borribles: Go For Broke review by MY

Borribles are runaway children who don't want to grow up. They get their names from adventures. But the greatest adventure is The Great Rumble Hunt.After a note that gets passed to Charlotte about a horse that saved their life during the Great Rumble Hunt, Charlotte gets together with the rest of the Hunt members and tries to save the horse. When things go terribly wrong and they end up in Wendle territory, warrior borribles that would love to kill them, their only hope is to trust a borrible that was a Wendle.