Bluffton: My Summers with Buster Keaton 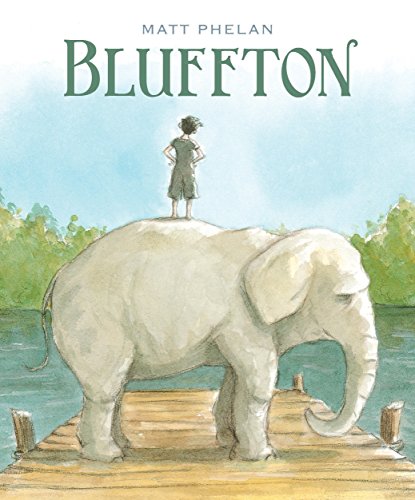 Matt Phelan, graphic novelist extraordinaire, presents a rollicking tribute to vaudeville, small-town dreams, and Buster Keaton as a boy.In the summer of 1908, in Muskegon, Michigan, a visiting troupe of vaudeville performers is about the most exciting thing since baseball. They’re summering in nearby Bluffton, so Henry has a few months to ogle the elephant and the zebra, the tightrope walkers and — lo and behold — a slapstick actor his own age named Buster Keaton. The show folk say Buster is indestructible; his father throws him around as part of the act and the audience roars, while Buster never cracks a smile. Henry longs to learn to take a fall like Buster, “the human mop,” but Buster just wants to play ball with Henry and his friends. With signature nostalgia, Scott O’Dell Award–winning graphic novelist Matt Phelan visualizes a bygone era with lustrous color, dynamic lines, and flawless dramatic pacing.
2 Votes

Tweet
Bluffton: My Summers with Buster Keaton review by SarahLou

Bluffton is about a boy, Henry, who had an ordinary life in Muskegon, Michigan. Then the Vaudevillians came. One of the Vaudevillians was a boy named Buster. Buster was a very good performer in the circus. After the first game of baseball they became inseparable friends. Buster came every summer break and the 2 boys fished, played pranks, and played lots of baseball when Henry didn’t have to work for his dad. One summer Henry found Buster and Sally, who is a neighbor of Henry’s, sitting on Sally’s porch and talking.

What's this?
Bluffton: My Summers with Buster Keaton review by cowboys1

"Bluffton" by Matt Phelan is a graphic novel.  It takes place in the early 1900's.  It is about a boy, named Henry, who meets a Vaudeville actor, named Buster Keaton. The two of them are the main characters in the book. They did a lot of things together  They played only in the summer because Buster and his parents were always travelling with the vaudeville performers.