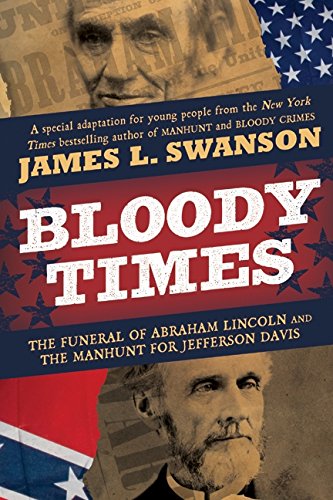 Bloody Times
James L. Swanson
New York Times bestselling author James L. Swanson brings to life the fast-paced, suspense-filled story of Abraham Lincoln's and Jefferson Davis's final journeys through our wounded nation following the Civil War.This suspense-filled true-crime thriller—the young readers’ adaptation of Swanson’s Bloody Crimes—explores two epic events of the Civil War era: the manhunt to apprehend Confederate president Jefferson Davis in the wake of Abraham Lincoln’s assassination and the momentous 20-day funeral pageant that brought President Lincoln’s body from Washington, DC to his home in Springfield. Full of fascinating twists and turns, and lavishly illustrated with dozens of rare historical images, Bloody Times captures the riveting stories of these two fallen leaders who changed the course of history. It’s perfect for young readers who enjoy dramatic nonfiction tales from the likes of Steve Sheinkin and Patricia McCormick.This book contains a note from the author, a glossary, a list of important Civil War figures, and a guide to visiting the historic sites mentioned within. A companion to the bestselling and highly acclaimed Chasing Lincoln's Killer.
1 Vote

Bloody Times is a historical nonfiction account about the manhunt for Jefferson Davis and the funeral procession of Abraham Lincoln. It is about the long funeral train that carried the 16th President home to Illinois. It is also about the manhunt for Jefferson Davis. Jefferson Davis was the first and last president of the Confederate States of America. He decided to flee to the deep south to evade capture from the federal troops that were searching for him. The Funeral trains route was covered in black crepe at each stop, to mourn the fallen President of the United States of America.