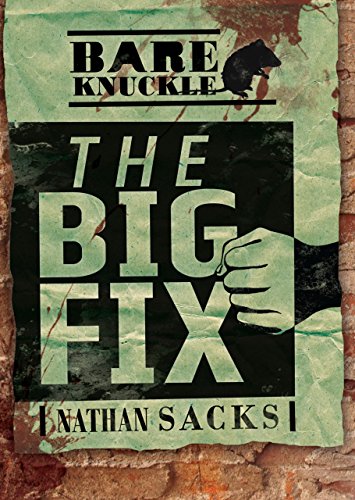 The Big Fix (Bareknuckle)
Nathan Sacks
"George Choogart has just stepped off the boat to Manhattan. In England, he was a teenage star reporter. But he'll have to prove himself all over again if he wants an American newspaper job. When George stumbles across the Woodrat, an underground boxing club, he realizes he's found his next story. The Woodrat's owner shows George a world of corruption—a world that might be too dangerous for either of them. Woodrat staffers are disappearing. Big Jim Dickinson, one of New York's wealthiest men, might be to blame. But if George wants to stop Big Jim, he'll have to conquer the boxing ring first."
1 Vote

The Big Fix is a book about George Choogart who just came to America from England to work for the New York Times. At  the New York Times building, George finds out that the man who hired him died while he was on the boat to America. The boss tells him to find a story he hasn’t heard of yet. George finds a story at an underground boxing club called the Woodrat, where corruption runs rampant and workers are disappearing. They have an idea who is behind it, but can George handle it? Find out when you read The Big Fix.