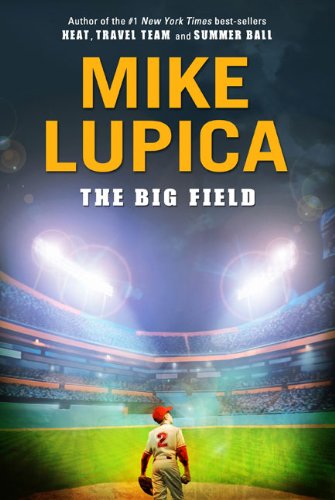 The Big Field
Mike Lupica
For Hutch, shortstop has always been home. It's where his father once played professionally, before injuries relegated him to watching games on TV instead of playing them. And it's where Hutch himself has always played and starred. Until now. The arrival of Darryl "D-Will" Williams, the top shortstop prospect from Florida since A-Rod, means Hutch is displaced, in more ways than one. Second base feels like second fiddle, and when he sees his father giving fielding tips to D-Will--the same father who can't be bothered to show up to watch his son play--Hutch feels betrayed. With the summer league championship on the line, just how far is Hutch willing to bend to be a good teammate? Mike Lupica returns to the big field for the first time since his #1 New York Times bestseller Heat and delivers a feel-good home run, showing how love of the game is a language fathers and sons speak from the heart. Q&A with Mike Lupica Q: Where did the idea for The Big Field come from? A: If it has one starting point, it was when Alex Rodriguez came to the Yankees and left shortstop to play third base. It wasn't so much that Rodriguez was the best all-around player in baseball at the time. It was that I knew he'd always thought of himself as a shortstop. I'm not sure he still doesn't think of himself as a shortstop. And suddenly he was a third baseman. Hutch isn't the best player in this book; Darryl Williams is. But Hutch had been a shortstop his whole life, it defined him as a ballplayer, and now because of the presence of Darryl on their American Legion team, he has to go to second base. It's the starting off point in a book that is ultimately about fathers and sons. But it's about a player having to leave his best position for the good of his team. Q: In The Big Field, the emotional heart of the story is Keith "Hutch" Hutchinson's relationship with his father, a washed-up ballplayer and former boy phenomenon who never advanced past the minor leagues and who completely soured on the game, setting the stage for a distant relationship with his son. Why did you decide to focus on the father-son dynamic in this novel? A: Sometimes with fathers and sons, when they can't communicate, they fall back on sports. It is like some universal language for fathers and sons. But at the start of The Big Field, Hutch and his dad don't even have that. And their journey, both of them, and I think it's a great journey, is finding that language again, finding a bond they never really lost. And finding each other. Q: Can you offer any advice for aspiring sports writers? A: Read the best guys, in books and newspapers and magazines. And then find ways to write. Write for the school paper, write anywhere you can, but write. I believe strongly that if you have the talent and the spirit, somebody will find you. Q: When writing a young character do you find yourself looking back to yourself at that age? Or your children? A: I look back to myself, and remember how important sports were to me, the fellowship, just the sheer fun of having a game with my buddies even if it wasn't organized. I tell people all the time that I still go to games thinking I might see something I've never seen before. I still have that feeling. But more than that, I see sports through the eyes of my children, too. See what they think is good, or cool, or worth watching. See what excites them. They've made me smarter about sports, they really have. But then that always happens when you hang around smart people. Q: Have you started working on your next book? Can you give us a sneak peak? A: My next book is already finished. It's about a young foster child, and his love for baseball. He's a catcher. And I think you're going to like him. The book is called "Safe at Home." The book I'm writing right now is my first soccer book. That's all I'm going to tell you!
1 Vote

Hutch Hutchinson is more at home on a baseball diamond than at his own house. Standing between second and third base, at shortstop, is paradise for him. And when his team is invited to play in a tournament for the state championship, Hutch knows his season is getting longer. But he does not foresee the hardships ahead of him, such as an unforgiving teammate and an unsupporting father. These hardships may take the fighting spirit right out of him.