The Beasts of Upton Puddle 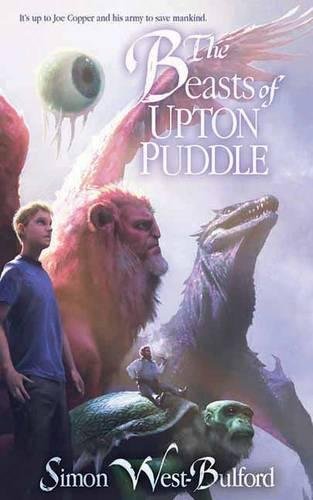 The Beasts of Upton Puddle
Simon West-Bulford
Bringing the mythological world into a modern setting and introducing young adult readers to a variety of strange monsters, this fantasy novel follows 12-year-old Joe Copper, as he travels along in his quest to save humankind. When Joe is hired by the eccentric Mrs. Merrynether as an errand boy at her remarkable veterinary practicea hidden refuge for a menagerie of creatures that should only exist in dreams and legendhe soon learns that she has a startling plan for his future: he is destined to command an army of beasts to protect humanity from the Conclavea brutal council of dragons hiding on a distant island. But Joe is plunged into his new role prematurely when the callous tycoon Argoyle Redwar, who has a secret menagerie of his own, tricks Mrs. Merrynether into revealing the location of the island. Overcoming his fears, the school bully, and an escaped creature on the loose in his own village, Joe races to the island to stop Redwar from provoking the dragons to war. He takes the most bizarre team imaginable: Lilly, the surly alcoholic cluricaun; Danariel, the seraph who lives in a lightbulb; Flarp, the giant flying eyeball who can’t control his excitement; Kiyoshi, the narcoleptic kappa with an extraordinary vocabulary; Snappel, the fiery wyvern plagued by hiccups; and Cornelius, the poisoned manticore. Together with newfound allies on the island, the champions are forced into an epic battle against fantastic odds, facing not only the Conclave but Redwar as he seeks total control.
1 Vote

Tweet
The Beasts of Upton Puddle review by Seth89

This book is about a boy named Joseph who is loving to creatures. One day he stumbles upon an old lady, Mrs. Merryweather,  who tames mystical creatures for a living. She deems him her errand boy and pupil, as long as he doesn't tell anybody. But keeping that secret is hard when a big-shot CEO, Redwar, a bully, and his mom all want answers on what he's doing. Especially when Redwar wants to find the source of these mystical creatures. Truth is that Mrs.