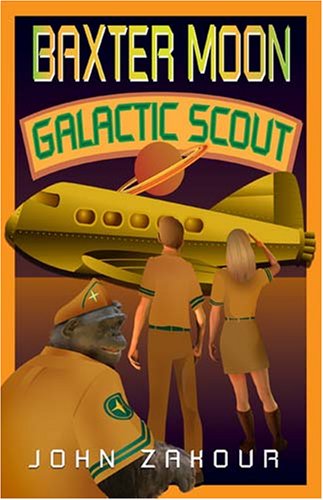 Baxter Moon Galactic Scout
John Zakour
Baxter Moon's first mission is to locate a missing Aquarian ship that has been taken over by a group of aliens whose aim is to subjugate Earth by entertaining its citizens to death. His second mission is to rescue a beautiful blue-haired Aquarian princess, known affectionately as "Your Highness." Baxter is assisted in his missions by his able but peculiar shuttle crew--a genetically modified, enormous girl who's a mechanical genius, her (genetically modified) twin, a small extremely klutzy math wizard, a genetically modified chimpanzee, and a nit-picking overly sensitive computer. Baxter's and his crew must avoid killer asteroids, elude deadly TVTrons, and, by the way, head off a possible galactic war. A funny book for would-be space cadets.
1 Vote

Baxter Moon: Galactic Scout is a fun science-fiction novel about a young, ordinary space cadet who is surrounded by an unordinary cast. A boy-genius, a super-strong girl, and a genetically altered chimpanzee complete Baxter Moons shuttle team. The book accounts Baxter's training as a pilot at the Galactic Academy of Scouts, and it also describes Baxter's unlikely first mission. Much like a sinister plot from a James Bond movie (see Tomorrow Never Dies), a group of evil robots called TVTrons attempt to ignite a war between Earth and the planet Aqua.