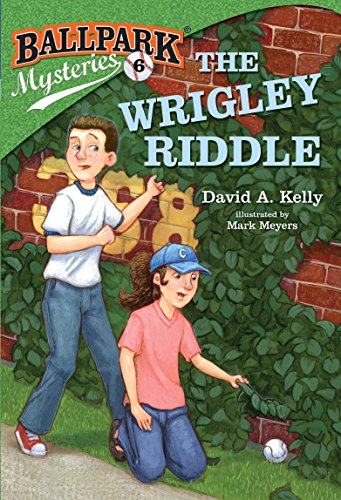 Ballpark Mysteries #6: The Wrigley Riddle (Stepping Stone)
Mark Meyers, David A. Kelly
Next up to the plate—book #6 in our early chapter book mystery series, where each book is set in a different American ballpark! Ivy-covered walls—they're the most famous part of the Chicago Cubs' historic ballpark, Wrigley Field. Mike and Kate can't wait to get down on the field to see the ivy for themselves. But when they do, they're horrified to discover patches of the ivy have been ripped away! Who would want to sabotage the stadium? Is it someone trying to curse the Cubs? Or is the rumor of a treasure hidden under the ivy tempting greedy fans? The Wrigley Riddle includes a fun fact page about Chicago's Wrigley Field.Cross Ron Roy's A to Z Mystery series with Matt Christopher's sports books and you get the Ballpark Mysteries: fun, puzzling whodunits aimed at the younger brothers and sisters of John Feinstein's fans.  Amazon Best Books of the Year 2013 (So Far): Chapter Books
1 Vote

This story is about two kids , Mike and Kate.  Mike and kate take a trip to Wrigley Field where they end upo trying to solve a mystery.  The mystery of the missing ivy.  The ivy is needed to help the Cubs win their baseball games.  Who cut down the ivy?  Is there a hidden treasure or not?  Can Mike and Kate find out who took the missing ivy and why?  Read this story to find out!